I had an epiphany when I was in high school: studying humans was not worth my time. I could never make any sense of them, and never would. As part of my grade 13 biology project I ranted and fumed about the poaching of orangutans to my fellow class mates, and ordered everyone to boycott companies that tested on animals. I slaved away at my studies, driven to help the environment and the animal kingdom, and was accepted into a university that had a great veterinary program. After the first year in university, I realized that being a vet would likely be too much for my animal-loving heart to handle. I doubted the fact that I could manage the mental anguish that seeing animals in pain everyday would bring. I decided to abandon my pursuit for a career as a vet, and started sniffing around Hydrogeology’s tree.

In 2005, I randomly signed up for an Introductory Apiculture class and, for lack of better words, became bee-witched by honey bee husbandry, honey bee democracy, and honey! I wanted to know everything about beekeeping and bees, and was eventually known as “The Bee Lady” around town. I bored my family with constant bee facts, and drove my friends crazy with horrible bee jokes (Q: what kind of bee makes milk? A: a boo-bee). I landed a job at the university’s honey bee research centre (aka The Bee Lab). I had found my niche, my passion, my career! I worked outside nearly every day, I taught beekeeping classes; I developed a Bee Lady character and gave many presentations. I was in my glory working and studying everything bees, and poured my heart and soul into sharing the wonder and importance of honey bees and pollination with everyone I knew and met. 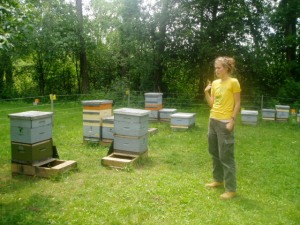 a glorious way to spend your days

I enjoyed becoming an apiculturist very, very much. When asked, “how’d you get into bees?” I replied that I wanted to become a vet, and found beekeeping to be a perfect balance for me; I got to invest my energy into the environment and into helping animals. There are two things about honey bees that I particularly revere: the first is the fact that honey bees are one of the only creatures that are givers of life, not takers. They collect nectar and pollen for sustenance and the act of doing so creates a life, as opposed to consuming one. The second was that if I accidentally hurt or killed a bee, blood, brains, and/or guts wouldn’t go squirting all over the place. This last statement is absolutely true, and can be reinforced by a brief story: I was working out in the bee yard, happily patrolling for swarm cells on a beautiful day with the sun on my back. Beekeepers manipulate honey bee frames using something called a “hive tool” which is a flat bar typically used in painting and carpentry. While putting a frame back into position, I decapitated a worker honey bee with my hive tool. I sliced her head clean off, and proceeded to watch the aftermath for a little too long. The worker realized that her head was missing, and started feeling around with her forelegs in an attempt to locate it, and she did. Once found, she began trying to put her head back on, turning it around, upside down, and backwards. Some of her nest mates wanted to help and began licking her headless neck. I watched for about half a minute, but it seemed like 10. And just like in a sci-fi movie or novel, the bee was still alive without her head AND trying to put it back on…until I decided it was time for me to stick out my thumb and crush her, in my ridiculous, human way of putting her “out of her misery”.

After obtaining my Honours degree in Biology, and spending four glorious years of working as an apiculture technician with highly developed bee-nerd keener abilities, I was invited to continue my stay at the Bee Lab to pursue a master’s degree, to which I accepted. I was assigned a two-year project studying an internal parasite that cannot be reproduced in a Petri dish, and therefore required harvesting large quantities of live, infected honey bees. One of my first tasks was to determine how long it takes to freeze a 500 mL jar full of live bees to death. I quickly figured out that too many bees in one killing jar takes several hours to die from freezing because they huddle together for warmth. A honey bee may also fully recover from being chilled, provided that she isn’t too cold for too long. Having a pile of a few hundred dissected bees come back to life from insufficient freezing was rather disturbing for this bee lover, so I got this initial step figured out fast. My days of working in the sun and keeping bees alive (with the occasional slip) were replaced by collecting sick bees, euthanizing them in a freezer, and dissecting their abdomens from the rest of their body in order to harvest the parasites that live within.

killing in the name of…science

I proceeded to grind hundreds of parasite-filled bee abdomens with a mortar and pestle, sometimes dodging squirts of hemolymph and feces, sometimes not. I did this particular step several times a day, for many months in a row, for almost two years straight. I killed many thousands of bees. There were some really dark days when I couldn’t get the smell of ground-up bee tissues out of the back of my throat, and there were several times when I gagged at the sight of the piles of bee heads and thoraxes that I threw out in the trash. I no longer felt the sun on my back. I no longer had that inflated ego and self-righteousness that is characteristic of a master’s student. I was in my own personal hell and wanted out. I knew it was getting bad when I would start to cry while I ground the abdomens of the animals I loved into a slurry that I needed for my school project.

I’ll never forget the day I approached one of my good friends with my Buddhist-like crisis. She pointed out, rather pointedly, that I wasn’t even a vegetarian. She had a really good point. My main issue was that my professor wanted me to perform more experiments, but I had hit my wit’s end. And I’m not exaggerating, either. There were countless times when I was greatly disturbed by this sadistic ritual that my brain tried to comfort itself by repeating that it was “in the name of science”, “for the sake of science”, and that “their present sacrifice is for their future betterment”. I could no longer fathom the idea of dissecting another bee without my heart falling out of my chest. I would have nightmares where I could smell the piles of dissected bees, and they would come back to life and crawl up my hands and onto my face.

I held a meeting with my graduate advisory committee members comprised of 4 professors. In short, I was granted relief from killing any more bees, and was told to move on to writing my thesis and compiling my data. The discussion we had of me failing as a scientist however, still haunts me to this day. One of those professors has recently refused to provide a reference for employment in apiculture research specifically due to my refusal to kill any more bees, “even though it was obvious for my research” he said. I wrote and defended my thesis, and was granted my Master of Environmental Science degree. As horrible as I feel about being a disappointment to my professors and fellow scientists for having a crisis of conscience, part of my remorse is derived from the fact that my professors failed me as well. Instead of encouraging and feeding my passion for live honey bee research, I was assigned a project that forced me into the disturbing realm of harvesting endoparasites and microbiology.

I struggle to describe the swirling feelings I have about the things I did to my beautiful bees: things like stuffing them into cages and force-feeding them parasite-laden inoculant, dismembering them while they were still alive, maintaining populations of the parasite in multiple beehives so I could have a source of parasites…it’s no wonder I ended up feeling the way I did. It was similar to being in my own cage of torture, put there by cold and seemingly uncaring scientists.

how are these cages remotely reflective of a bee’s natural environment?

I’m a hypocrite for testing on animals, and there’s going to be some spiritual repercussions put upon me for the thousands of lives I have taken off this planet. Maybe I can make up for it by being the really good beekeeper that I am, and that may bee how I can give back.